Electronic Logging Devices (ELDs) are coming, and whether or not you agree with them, if you want to stay on the road you’ll need to figure out what device is best suited for you.  There are still plenty of questions surrounding ELDs and there will probably be more still once the deadline is past.  The article below addresses some of the more popular questions and provides some very useful information to think about as the deadline approaches. 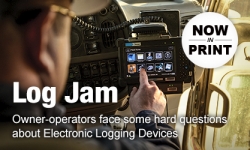 There are still plenty of questions being posed by drivers, owner-operators and small fleets as the industry moves ever closer to the U.S. mandate for Electronic Logging Devices (ELDs). Here are a few things to consider before the December 18 deadline arrives.

What type of device do I need?

Owner-operators working under contract to a motor carrier will probably have to use the brand and model of device dictated by the carrier. Who pays for the device and the associated fees will have to be decided by the parties involved.

Owner-operators working under their own authority will have to acquire their own Federal Motor Carrier Safety Administration-compliant ELD. Since the owner-operator in this case is also the carrier, there will be two accounts – one as a fleet manager (the back end) and one as a driver (the in-cab device). The rule requires those accounts to be separate.

Fleet management software options may or may not be needed. That extra functionality is not required. But options such as fuel tax reporting or electronic trip inspection reports can help to manage even a -single-truck operation.

At their most basic, ELDs must record Hours of Service, and must be physically or electronically connected to the truck to capture things like key on and off time, and distance traveled. But the connection must always be maintained when the truck is operating. Devices that link to the truck’s Electronic Control Module with a cellular connection could face dropped signals.

Displays also vary between devices, and the data can be transferred to roadside inspectors several ways. The Record of Duty Status (RODS) can be printed if the device is equipped with a printer, downloaded to a USB device, or transferred by Bluetooth or email. The device can also be handed to the officer, but the data must still be exportable in some recognized format.

The rule does not require real-time data to be transmitted the back office, which would require a satellite or cellular link. “The regulation only requires that the data be submitted to the carrier [the owner–operator’s office computer] within 13 days,” says Alexis Capelle, ELD program manager at Continental.

As for the device itself, smartphones and tablets are permitted if they are physically or electronically tethered to the truck’s electronic control through the dataport. Dedicated devices have the same requirement. The device must be secured to the dashboard while the truck is operating, and must be tamper-proof.

Options for owner-operators range from full-scale devices to apps with connecting hardware.

If I work for a driver service or temporary driver pool, how do I transfer my logs from one carrier to another?

The short answer is you can’t. This is known in the ELD world as interoperability, and in drafting its rule, regulators chose not to address it.

“Nobody has made provisions to accept data from one ELD brand to another,” says Capelle.

A driver working for Carrier A this week and Carrier B next week would have to print out the previous seven or 14 days worth of logs from Carrier A and manually enter them into Carrier B’s ELD. Paper copies of the last week’s logs might pass a roadside inspection, but would be insufficient in an audit because Carrier B’s system would not show the hours worked by the driver in the previous week.

“About 10% of our workforce fits into that category, and I know it’s going to be a problem for them,” she says. “We’re looking at all our options, but any solution really has to come from the ELD vendors doing something about interoperability.”

What happens to my logs if I leave a carrier, or if I need them later for income tax purposes?

Carriers are required to maintain the electronic records for six months. Those accounts will remain active for the time the logs must be retained by the carrier, even if the driver no longer works there. PDF copies of the logs can be downloaded and retained by the driver for later use.

If you are currently running or plan to acquire a compliant Automatic On-Board Recording Device (AOBRD), you will have until December 16, 2019 to transition to an ELD. This approach is being recommended by many ELD suppliers since it allows two years of breathing room while governments, vendors, and enforcement officials sort out compliance requirements.

“I’m telling everyone I speak with to get an AOBRD as soon as they can so they can skip right over the crunch in December,” says Fred Fakkema, vice president of compliance at Zonar Systems. “It will take at least a year to get enforcement officials trained on the 80 to 100 devices that will be on the market by the end of the year. It’s going to be a mess at roadside for a long time to come.”

“When the time comes, all we will require is a firmware upgrade and the device will transition from an AOBRD to an ELD,” he says. “When the customer is ready, they can request the upgrade.”

Word emerged in mid-June that the U.S. Supreme Court had declined to hear a challenge to the U.S. Department of Transportation’s ELD mandate brought by the Owner-Operator Independent Drivers Association, removing what many believe was the last possible opportunity to scuttle the mandate. The group had argued it violated constitutional protections from warrantless searches and seizures.

ELDs now appear imminent, so drivers and owner-operators better start planning to integrate the devices into their businesses. Robin Doherty, president of Edmonton-based Verigo, a supplier of ELD software, says the search for a suitable device should begin with finding something that looks, feels and works like a logbook.

“There are lots of devices on the market with lots of bells and whistles, but the only legal requirement of an ELD is [Hours of Service] compliance,” he says. “It may not be immediately obvious which devices will prove to be compliant, but you can certainly narrow the search by eliminating options you don’t need and aren’t required to have.”